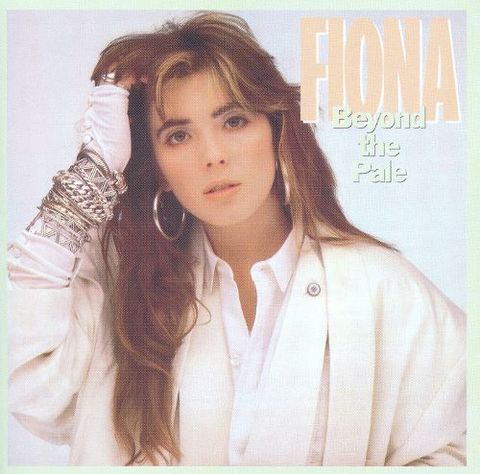 Not only is this the ninth album in a series, but it's also the second album in a new series. So, let's call this album 9.2 in the current series. Why? Because we can!

The crack staff had quite a chuckle when someone basically begged for a clue last week. Then there was that other silly person who put on their Mr. Sarcastic pants and wondered if this week would be album 9.3 in a series. Shows what they know!

Always good to have a chuckle or two.

Do they still make those? Not a lot of bang for the buck with those Chuckles. I believe there were five to a pack, would have been a better bargain if there were six.

So this week's selection is the 1986 release from Fiona, Beyond The Pale. No jumping on this album cover, but that fashion is definitely 80's. As with her first album, the album really doesn't give you an idea what kind of music is contained within. Is it dance music? Pop? Rock? Choral? Spoken word musings? All of the above? None of the above?

Guess you'll just have to listen to find out.

Allmusic.com doesn't give this much of a favorable review, but at least there's a review:

The second album from this sweetly histrionic singer, featuring '80s pop, gated drums, and synthesizer stabs punctuated with '80s metal guitar. With Fiona out front and then-lover Beau Hill twiddling knobs, most every cut transcends the cookie cutter even in small ways, as when "Tragedy" mocks itself with electronic basso profundo backing vocals or "Hopelessly Love You" opens with a keyboard stammer and an intro twisting the fair maiden's pitches into helium giggles. Side two offers her first sustained suite, including "Running out of Night," a warning to an aging miscreant to either stay in bed or keep running; "He's on My Side" is the record's most pristine melody over heartfelt, embarrassed goop that's perfect for the newlyweds' first dance, and "Keeper of the Flame" is a jilted lover's vow that, like the mole in the ground, she will root her ex's mountain down. Fiona co-wrote all three of the latter; it's evident she's gearing up for her high-water mark, Heart Like a Gun.

Availability: The remastered edition runs around $12 and contains two bonus tracks of the same song and, as usual, they're not included here.

Not surprised for not getting a clue. I mean, it was silly of me to expect something like that from Jon and his staff on crack. It takes imagination to come up with a clue and they obviously lack in that department. No biggie. Know your limits... and all that.

I'm not going to guess the 9 part of the series, since it was previously identified as Rock Candy releases, with inconsistent listings, I might add. Again, if you gonna allow your staff to be on crack, you can be sure they learned it from a bad influence, so I'll just throw a mud on the wall to see if it sticks, with that .2 part of the theme - it's either Fiona (her second album) or more broadly, it's a Female Fronted music?

As for the album itself. It's definitely Pop. Not that I mind that. I like those 80's gimmicks it graciously offers. The songs are OK. Not as good as the ones on the first album and for sure inferior to what the third release brings, but I'm beating the dead horse here, aren't I? The biggest regret is that the guitars are not as dominant as they were on the first release, although the songs were Messano was involved are again the better ones.

The green track is You Better Wait, since it does give you a glimpse (also servers as a warning) of what to expect from the next album.

You know there is one thing missing from this album that her other album had, and I can sum it up in two words mashed together...  but first...

Whoever is responsible for the packaging of this girls music missed the boat completely.  None of the two album covers give the listener a hint as to what they're going to hear.  As a consumer who would at times buy albums because of the cover these would've never stood a chance of any impulse buy.  Yes its poppy - but at least it has an edge, ok not much of an edge but still, if they were going after Madonna listeners this isn't them...

Bottom line - nothing is really working here for me, I don't hear anything that makes me want to hear it again, so I must accept your Red track as correct by default.

Oh yeah what was missing?  Sideboob.  (You're welcome)

PS:  You didn't increment the minor number so I think you've modified your sub-series throwing us off the trail.  Or you just messed up, yet again...

PSS:  Green is not in the red family and therefore is less likely to annoy Jon

PSS: Green, like red, is a color. Therefore, it is annoying.