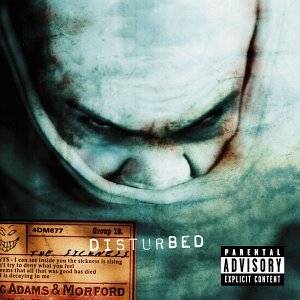 Rock And Roll Hall Of Fame Member: Not Eligible

Disclaimer: NSFW or small children or your preacher.

So I'm kicking off March Metal Madness with some Nu Metal.  This should go over really well with the regulars.  It's also First Friday, so you get an anniversary album as well.  This week's Album of the Week is The Sickness by Disturbed.  The album was released on March 7th of 2000, so it's actual anniversary date is in just two days.

I like this album.  Can't say I really spin it anymore, but at one time it was in pretty high rotation for me.  I was in some turmoil at that time in my life, and this is an angry album.  So it was a good fit for me.  This was quite different in style, which was great.  However, I think the band's creative peak was reached immediately as the same old sound has grown stale since then.

The opening salvo of Voices, The Game, Stupify and Down With The Sickness really set the tone.  All are good songs with The Game being my favorite overall Disturbed track.  The band tacks on a nice little cover of Shout by Tears For Fears (I definitely think this qualifies as a bizzarro cover).  The band would continue that cover trend a couple of albums later by covering Genesis' Land Of Confusion).

So, what do you think about this album?  Do you own it?  Let me know.

4. Down With The Sickness

I own the album and love it.

Wow really dig Voices! Really love the driving beat and the vocals are intense, in your face, and passionate.  It begins with a roar and ends abruptly.  Cool tune - probably could have been the highlight of my one and only Openers SHT list!  The Game opens with some real pop sensibility and a normalized vocal before breaking into a seriously kick ass riff.  Crunchy chorus and bridge only adds to the ambience of flames and heat surrounding a human sized game board, hey its my listening experience!

Love the semi-automatic, rat-a-tat-tat feel to his vocal and the bass lines really make this work.  The epicness mixed in with the dark overlord undertone has me banging my head and waving the horns.  Stupify is, how you say...  Stupifying!  Jungle beats kick off the next track and I feel like I've been transported to the jungles of Thailand for some reason - Down With Jungle Fever!  ah-wah-ah-ah-ah-ah...  Only Steven Tyler does it better!

Violent Fetish and Fear perfectly feed off of each other while Numb calms the user in an almost power-ballady (tm Jon) kind of way.  Want hauntingly pulls you back into the crunch and uh... uh...  cool vocal experience.  This guy is the master at the abrupt start/stop vocal experience.  Maybe better than Tyler??

Nice progressive moments in Conflict, subtle but present!  And I love Tears for Fears, but this cover is just so-so, but a so-so cover doesn't mean that's a bad thing.  YES YES!!!  Disturbed in da house!  I love rock/rap or in this case metal/rap.  And I've always said cussing in a song is only OK when the context is correct and clearly this is a correct context!  And we close with more contextual cussing, appropriate variety of course!  Killer album!!  Putting this on my wish list for later!

You are so full of it...but I was entertained.

Youre not suggesting that I portrayed my listening experience as something less than honest are you?

Thankfully there was something for my earhole and really gladtheyname-droppedthemselves. Actually, the keyboards on this song arekindacool(OW!OW!).

He wants to get psycho. Ishetalkingaboutthemovie?

The last song sounds a bit like Rammstein with the geetars butRammsateinaresomuchbetter.

My feelings after listening to this: