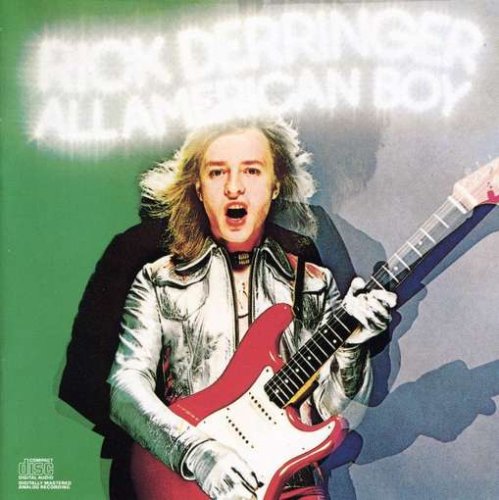 Somebody in Denmark likes the path I'm on in this here Album of the Week forum.  I wonder if that someone will feel the same after this week's post?  This week I'm throwin' Rick Derringer's debut album, All American Boy, at you. I think most, not all, but most self-respecting classic rock fans have heard of Rick Derringer.  At least they've heard of his big hit, Rock and Roll, Hoochie Koo.  They may have heard these things too:

As far as the rest of the album, I really like Teenage Queen (a song I didn't recognize by name, but I have definitely heard it previously), The Airport Giveth (The Airport Taketh Away) and Jump, Jump, Jump. The latter is just a really cool song.

So, have you ever heard a Rick Derringer song other than Rock and Roll, Hoochie Koo?  If you don't already own the album but, look on Amazon.  The album is only $4.99.  Be sure and check out the extras I added below the tracklisting.

11. Slide On Over Slinky

I'm sure that those that regularly visit this site have heard other Rick Derringer songs before. Then again, maybe not.

What I like about this album is that it's all over the board with all different types of styles. Hey, he almost looks like Suzi Quatro or, for those in a "Happy Days" mood, Leather Tuscadero. Ok, maybe not.

I don't know about the spacesuit on the cover. Kinda confusing, it's almost like we should be expecting space rock. The followup album cover is even more confusing. It looks like a Leif Garret album cover.

This is a good album, but he hits all cylinder with Sweet Evil. That album rocks.

Can you play geetar while wearing silver gloves????

I remember her...  errrr I mean the previous Derringer post.  I was the first like it a lot! (as usual)

Someone in Denmark does like the path, you've taken lately in AOTW, but looking at this album-cover, makes me think, that this week, you might loose me.....but......

Nope, Rock and Roll, Hoochi Koo doesn't ring a bell at all.  I don't think I've ever heard it. Maybe I have, but I've totally forgotten about it.

Joy Ride sounds much better to me, at least the start. It has that 70's sound, I like. It makes me think of Elton John. Even though I'm not a big fan of instrumentals, it's not bad.

Does he sing? Because he doesn't have a strong voice at all. Still Teenage Queen ain't bad. Now I get a Meat Loaf-vibe. Again that imo cool 70's sound. Have I ever said, that I love the 70's. My absolute favorite decade. Even bad music in the 70's could be pretty good (The Osmonds, Barry Manilow aso).

Cheap Tequila makes me think of Elton John once again. He had kind of the same sound in the very beginning of the 70's. Not in 1973, more like 1971, though.

Hold is yet another 70's-sounding song, which is good for me. The worst song so far is in fact the "hit" Rock N Roll, Hochie Koo.

Song no. 7 (long title) might be the second worst song so far. A bit of filler imo.

Good rock'n'roll on the next song. Elton John again, or at least Glam Rock. I love Glam Rock!!

It's raining right now where I am, so this song suits me just fine. But it's just okay, not one of the best tracks. I like the harmonica, though.

Good start to the next song. Good speed. Oh, it's another instrumental. Again, it's not bad for an instrumental.

Next song sounds a bit like Nazareth. Not bad, but not one of the best either.

And a quiot song to end it all. Again, not a bad song at all. It actually sounds like it's from a couple of years later, and not 1973.

Another good interesting listening experience, and another album I never ever would had heard, if it wasn't for AOTW.

Didn't this dude play on a KISS-album, by the way? Destroyer?

Even though I listen to a different style of music these days, I can allways hear when it's good or bad music.

Pretty sure Derringer played on Lick It Up.

There'll be no more talk of men wearing silver gloves ...

I recall my brother having this album and I also recall how big the song Rock and Roll, Hoochie Koo was, but Niels is right, its not even the best song on the album.  I liked this a good bit, not Sweet Evil good, but its good.  There's a lot of creativity in the guitar sounds, and playing, its more acoustic than I would have thought it would be, but that's not always bad thing.  I loved the harp on Its Raining, sounded very much like Stevie Wonder was playing it, was he?

I think where is fell flat was in the production, there's no real sonicness here and it could really used it because the songs feel bigger than the production represented them.