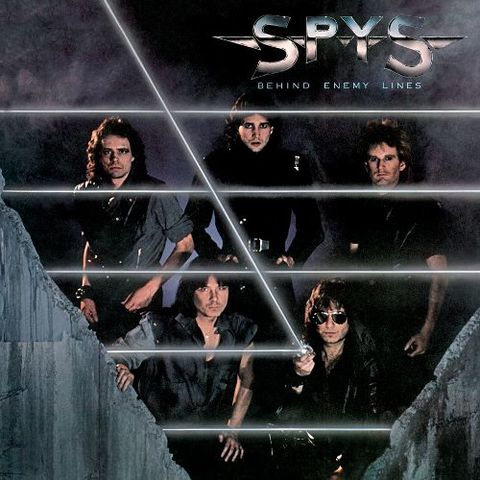 Not only is this the eighth album in a series, but it's also the second album in a new series. So, let's call this album 8.2 in the current series. Why? Because we can!

Before we get to this week's selection, I would like to share a conversation I had with my cracked staff in the break room of our corporate offices:

"Is the red track something that's debatable?"

"So anyone stating that our pick for the red track is wrong is.....?"

There you have it. The red track IS NOT debatable. So says those in the break room. Their word is golden.

That brings us to this week's album, Behind Enemy Lines from Spys. It's their second (and last) album and was released in 1983. I don't believe there was any real chart action with this release. It's a shame because the title track is quite over-the-top, but in a good way. More prog than the first album as well plus some new wave.

Allmusic has nothing to say about this album, but there's a nice review on glorydazemusic.com.

Availability: Around $11 new or used.

There is some closed circuit footage of Jon in the break room meeting referenced above, I believe that's Scott he's talking to:

Definitely Scott digging in his nose. That's why we call him "Digger".

I would never!  Besides, I have my own far more sanitary method...

I believe this is much more sanitary.

I gave this a good listen.  I tried, but I just couldn't get into it at all.

Maybe it's a bit too new wave for me.  Which is weird, because I do like some new wave.

I did enjoy Younger Days, it grabbed my attention.  Can't Stop Us Now is good too.

Otherwise, not anything I'd be interested in picking up.

Your version control is whack..  How can this be an 8.2, what's next week?  9.3?  Weird numbering scheme if you ask me... And as for your claims of an unchallengeable "red" tracks, well, somebody's got to fix 'em!  And as for this weeks pick - Sheep Don't Talk Back - seriously?   What is this band, a Wyoming back country band of farming hooligans?  Seems odd that one would sympathize with this song...

Boy this sure is a cliché filled 80s-fest!  There are some nice moments mostly when the guitar solos briefly make appearances.  Otherwise this is firmly planted in "eh-ville"...  I cant get into this so-called "red" track at all.  Its quite bad but even worse, its disturbing!  I'm with RJ there's nothing here that I can grab onto at all, just a couple brief guitar moments and thats why the real Cherry pick here is Midnight Fantasy - which strangely disturbs me as well since there's this sheep song on here, I think they are somehow related but I don't want to know any more than I already do...

Well, I'd like to hazard a guess to the theme, but wouldn't know where to start with. Perhaps a clue? Especially at these early stages of the new "series"?

I remember this album. I heard it in a whole. The only thing I can't remember is where or when. I don't have it, I know that much, but few songs are very familiar. In comparison to the previous album (which was even from top to bottom) Behind Enemy Lines has songs that stand out and they are better than anything on the first album, as well as songs that don't stand out and they are immediately forgettable.

I heard some Russian there. Does that mean this is the International release? Do you have the North American version?

It was always Russian.

Of course it was. Why am I not surprised.