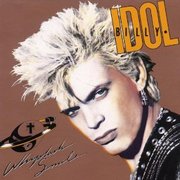 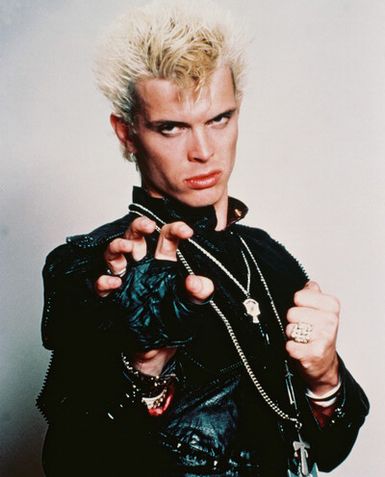 Along with Duran Duran, Billy Idol was one the first pop/rock artists to achieve massive success in the early '80s due to a then brand-new U.S. television network, MTV. Mixing his bad-boy good looks with an appealing blend of pop hooks, punk attitude, and a dance beats, Idolquickly rocketed to stardom, before hard living derailed his career and almost proved fatal. Born William Michael Albert Broad on November 30, 1955, in Middlesex, England, the youngster relocated with his family for a brief spell to New York, before returning back to England. After a stint at Sussex University only last a year, Broadfound himself as part of a group of teen punk rockers who befriended and followed the Sex Pistols, known as "the Bromley Contingent" (a member of this colorful group of characters wasSiouxsie Sioux, eventual leader of Siouxsie & the Banshees).

It wasn't long before Broad realized that he too could be the frontman of a punk band, and assumed the name Billy Idol shortly thereafter. After a stint playing guitar in a group called Chelseadidn't pan out (interestingly, the group featured future Clashguitarist Mick Jones and future Damned guitarist Brian James), Idolput down the guitar and picked up the mic, and recruited bassistTony James, drummer John Towe, and guitarist Bob Andrews, forming Generation X in 1976. Named after a 1960s paperback book, the band signed a recording contract with Chrysalis shortly thereafter (Towe was replaced with new skinsman Mark Laff) -- resulting in such releases as 1978's self-titled debut, 1979's Valley of the Dolls, and 1981's Kiss Me Deadly -- before splitting up.

Disappointed with Generation X's demise, Idol relocated to New York City, where he pursued a career as a solo artist. Hooking up withKiss manager Bill Aucoin, Idol issued the 1981 EP Don't Stop(comprised of a cover of Tommy James' '60s hit "Mony Mony" and a pair of remixed Generation X tracks), which helped the singer score another record deal with his former band's label, Chrysalis. Idolfound the perfect collaborator and partner in guitarist/Johnny Thunders look-alike Steve Stevens, and issued a self-titled debut in July of 1982. A pair of eye-catching videos for the tracks "White Wedding" and "Dancing With Myself" (the latter a remake of aGeneration X composition) scored major air time on MTV, with both clips focusing in on Idol's spiky, peroxide blonde hair and Elvis-like sneer. The debut eventually obtained gold certification, and set the stage perfectly for Idol's big commercial breakthrough, 1984's Rebel Yell.

Rebel Yell became the singer's best-selling album of his career (eventually going double platinum), spawning such big-time MTV/radio hits as the album's anthemic title track, "Eyes Without a Face," and "Flesh for Fantasy," establishing Idol as an arena headliner stateside. But with massive success came its many distractions, which prevented Idol from issuing a new studio album until three years after Rebel Yell.

1987's Whiplash Smile was another sizeable hit on the strength of such hits as "To Be a Lover" and "Sweet Sixteen," but failed to live up to the lofty expectations set by his previous releases. Stevens jumped ship shortly thereafter to launch his own band, Steve Stevens' Atomic Playboys (and eventually was a member of Mötley Crüe singer Vince Neil's solo band), leavingIdol to fend for himself.

An eight-track best-of set, Vital Idol, was issued later the same year, spawning one of the year's most heavily played MTV videos -- a live version of the previously recorded cover of "Mony Mony" -- which helped keep Idol in the spotlight. Idol spent the next few years working on his fourth studio release, but reappeared in the summer of 1989 as part of an all-star rendition of the Who's Tommy, withIdol playing the role of the sadistic character Cousin Kevin. Around the time of Idol's next release, 1990's Charmed Life, the singer was involved in a serious motorcycle accident (in which he almost lost his leg), forcing the singer to walk with a cane for a period of time; the video for the album's lead-off single, "Cradle of Love," featured the singer filmed from the waist up. The ploy worked, as the single (which was also used as the theme song in the failed Andrew "Dice" Clay movie, Ford Fairlane) was another smash hit, making Charmed Life the fourth Idol album in a row to achieve at least reach platinum sales.

Expectedly, several years passed before the release of Idol's next album, during which time he tried his hand at acting with a bit part in Oliver Stone's motion picture The Doors. By the time 1993'sCyberpunk surfaced, Idol had dropped his spiky peroxide hairstyle in place of dreadlocks, and experimented with techno beats. The move proved to be an unwise one, as the album tanked and sank from the charts. At the same time, Idol was knee deep in drug addiction, resulting in another close brush with death when he overdosed and had to be treated in a Los Angeles hospital in 1994. Not much was heard from Idol until 1998, when he made a cameo appearance (as himself) in the hit Adam Sandler/Drew Barrymore comedy The Wedding Singer, which resulted in renewed interest. Idol teamed up once again with Stevens, was the subject of a VH1: Behind the Music special (as well as a Storytellers episode for the channel, which was ultimately issued as a CD), and issued a more extensive Greatest Hitsset in 2001; the latter of which sold 500,000 copies in the U.S. alone. Next up was his first studio album since Cyberpunk, Devil's Playground, released on Sanctuary in 2005.

You need to be a member of BILLY IDOL to add comments!

Haven't read the book but totally love the album.  I was floored by it.

Eyes Without A Face, Flesh For Fantasy and Dancing With Myself are my personal favorites.