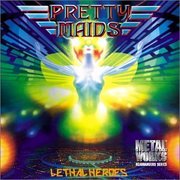 Danish hard rock band Pretty Maids was formed in 1981, the group recorded a demo which earned them a contract with the British label Bullet, resulting in the 1983 release of their self-titled debut EP.

Pretty Maids are a Danish heavy metal band from Horsens, Denmark. Formed in 1981 by Ronnie Atkins and Ken Hammer. Their sound and music can be described as classic guitar-laden heavy rock with a strong emphasis on melodic elements like vocals and keyboards.

Over the years, Pretty Maids have sold hundreds of thousands of records, but have never broken through in a major way, except in Japan during the 1990s. They have supported well known bands as Black Sabbath, Whitesnake, Deep Purple, Alice Cooper, and Saxon, and were also featured at the 1987 German version of Monsters of Rock, where Metallica headlined along with Deep Purple.

Pretty Maids are currently still active, and their upcoming album, Pandemonium, will be released through Frontiers Records on May 14, 2010. After a prolonged international touring hiatus before the release of the 2006 Wake Up To The Real World album, the band have every year since been touring their primary markets of Denmark, Sweden, Germany, and Spain. 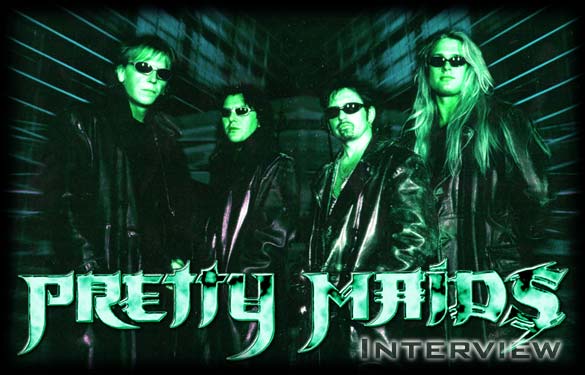 Pretty Maids were formed in 1981 by friends Ken Hammer and Ronnie Atkins in Horsens, Denmark. They were initially a cover band first named Pretty Pretty Panick, but soon started writing their own material and a self-financed demo resulted in a deal with the English record label Bullet Records.

In 1983, the band released their debut self-titled EP under the name Pretty Maids which is still the same today, and further recognition was fuelled by great reaction to their UK tour the same year. Inevitably the band outgrew their label, and in 1984 signed to CBS Records, who re-released their self titled EP.
In 1984, the band released their debut studio album, Red, Hot and Heavy, which was a success. More acclaim was followed with their second stuido album, Future World, released in 1987. It was recorded in New York with renowned producer Eddie Kramer. The album is considered to define the band's definite sound, with typically aggressive rockers alongside more commercial, melodic moments.
1990s
The 1990 Follow up Jump The Gun, was produced by Deep Purple bassist Roger Glover, offered more of the same catchy riffs. The record label had put in all efforts to break the charts worldwide with this record, but it never took off, except in Japan. Whether it was lack of hits, marketing or they were simply another victim of grunge music is unknown, but the record didn't live up to expectations. The band more or less broke up after the lack of success with this record, leaving only founding members Ron Atkins and Ken Hammer.
They would not quit, however, so they recruited drummer Michael Fast and bass player Kenn Jackson, and went on to record Sin-Decade in 1992 with famed Metallica producer Flemming Rasmussen at the buttons. The album produced the hit single Please Don't Leave Me - a John Sykes/Phil Lynott cover which opened the band up to an even wider audience.
The band did very well in Japan in the first half of the 90s and founded large fanbase over there. The Asian audience has a special craving for Pretty Maids' ballads and more soft repertoire.
In 1995 however, the band really surprised the fans and critics by releasing the storming Scream. This was an altogether heavier and guitar-lead approach which gained numerous plaudits and saw the band release their first live album, Screamin' Live.

The follow up Spooked, released in 1997, was regarded by many as an instant classic, maintaining the energy and heaviness of Scream whilst still capturing the quintessential melody that is Pretty Maids.

1999's Anything Worth Doing Is Worth Overdoing, whilst certainly having an overdone album title, also produced one of the songs of the year with Hell On High Heels, an absolute monster of commercial, hard driving rock.
2000s

In 2000 the Danish heavy rockers released the album Carpe Diem. A touch more melodic than their previous offerings - a fact that hasn't gone down too well with certain factions of their fan-base, but this is still a classic album which has all the Pretty Maids trademarks in abundance.

In 2002 Pretty Maids released the album Planet Panic which was a trip back to the heavier sides of their catalogue.

In 2003 their management company Rock On went bankrupt due to some very unwise business moves in September 2002. This left Pretty Maids in a very bad financial situation and also left them with a lot of legal problems as well as lot of business and copyright mess.

Lead guitarist Ken Hammer was struck by a heart attack on December 6 2003. He has since recovered completely and has been on stage numerous times since the incident.

As of July 2005 the drummer since 1991, Michael Fast, decided to leave before the recording of Wake Up To The Real World - an album that was originally intended to be released in 2005, but the initial recordings was postponed to the summer of 2006. In April 2006, new drummer Allan Tschicaja (Royal Hunt, Kingdom Come) was announced as Michael Fast's replacement. In 2006, Morten Sandager (ex-Mercenary) joined Pretty Maids, playing the keyboards.

Influences and Legacy
Pretty Maids have on various occasions mentioned Thin Lizzy, Led Zeppelin, Deep Purple, Kiss, Slade, and Queen as some of their influences.

Over the years, they have recorded cover songs from many of these influences, including their most famous hit to date: A 1992 cover of John Sykes' ballad Please Don't Leave Me.

In 1998, Swedish power metal band HammerFall released their Legacy of Kings album, which features a cover of Pretty Maids' song "Back to Back" from their debut album Red, Hot and Heavy.

You need to be a member of Pretty Maids to add comments!

Comment by Niels (Mod) on August 14, 2010 at 3:01pm
I hope, that you'll get more than a blank screen, RJhog, because now I've added the rest of all the Pretty Maids-songs, that I can find on MIXPOD. and it's quite a few, even most (all?) the songs from "Pandemonium".

Comment by RJhog (Admin) on August 14, 2010 at 12:56pm
All I see is a blank screen right now, maybe it will be working later. I'm looking forward to reading and listening to this page.