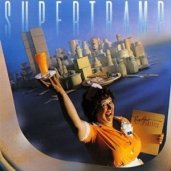 Supertramp have a number of best-selling albums, culminating in their 1979 masterpiece Breakfast in America.

Supertramp are a British progressive rock band that released a series of top-selling albums in the 1970s and early 1980s.

Their early music included ambitious concept albums, from which were drawn a number of hits including "Goodbye Stranger", "Bloody Well Right", "The Logical Song", "Breakfast in America", "Dreamer", "Give a Little Bit", "It's Raining Again", and "Take the Long Way Home". Supertramp attained superstardom in the United States, Canada, most of Europe, South Africa, Australia and Brazil, although they were not quite as popular in the UK. Nonetheless, the album Breakfast in America was a big hit there, reaching number three on the UK charts and featuring two top 10 singles.
Early Years (1969 - 1972)
In 1969, Roger Hodgson, who had already signed to a label and was recording, joined forces with Rick Davies in the formation of Supertramp. Other members of this proto-Supertramp included Richard Palmer (guitar, balalaika, vocals) and Robert Millar (percussion, harmonica). Initially, Roger Hodgson sang and played bass guitar (and, on the side, guitar, cello and flageolet). The band was called Daddy from August 1969 to January 1970. This was changed to Supertramp, a name taken from Welsh writer W. H. Davies' book, The Autobiography of a Super-Tramp, published in 1908.

They were one of the first groups to be signed to the UK branch of A&M Records. The first album, Supertramp, was released on 14 July 1970 in the UK and Canada only (it was first issued in the US in 1977). Hodgson and Davies composed the songs while Palmer wrote the lyrics. Although it was very intense and lyrical, it did not attract a large audience and few critics paid it any attention. Dave Winthrop (flute and saxophone) joined the group after the release of the first record and Supertramp was able to earn a slot on the bill of the Isle of Wight Festival 1970. Richard Palmer abruptly left six months after the album's release. Robert Millar suffered a nervous breakdown shortly afterward.

For the next album, Indelibly Stamped, released in June 1971 (in both UK and US), Frank Farrell (bass) and Kevin Currie (percussion) replaced Millar and Palmer, while Roger Hodgson switched to guitar. From this album forward, Hodgson and Davies each wrote and composed separately, no longer using a lyricist. The person who sang the song was the one who wrote and composed it. Indelibly Stamped featured rocking Beatlesque tunes, with vocal harmonies similar to Simon & Garfunkel songs (Davies now serving as the band's second lead singer, alongside Hodgson, who suggested that the band should have two lead vocalists), a more commercial approach and eye-catching cover artwork. Supertramp had established themselves as a "cult" band. Sales, however, failed to improve and sold even less than their debut. All members gradually quit except Hodgson and Davies.

These first two albums were later reissued during Supertramp's popularity peak and have maintained an appeal with die-hard fans. The first album is melancholic and quieter and the songs are spread out more than they were later on. Hodgson once called it his favourite Supertramp album (though later he favoured Crisis What Crisis?). The second album is their most traditionally rock album and certainly their heaviest sound.

Initial success and commercial breakthrough (1973 - 1983)
In late 1972, after being persuaded to carry on, Davies and Hodgson went on an extensive search for replacements, which first brought aboard Dougie Thomson (bass), who played with the band almost a year before auditions resumed to complete the line-up. In 1973, auditions restarted and brought in Bob Siebenberg (drums) and John Helliwell (saxophone, other woodwinds, occasional keyboards, backing vocals), completing the line-up that would create the group's defining albums. Hodgson would also begin playing keyboards in the band in addition to guitar, usually acoustic and electric pianos on his own compositions. The classic Supertramp keyboard is a Wurlitzer electric piano (model 200A) with its unmistakable bright sound and biting distortion when played hard.

A lost single, "Land Ho" was the first recording by the reformed Supertramp. It was not included on "Crime of the Century" and has never been reissued in its original form, though it has been released in other forms. Roger Hodgson resurrected the song during his solo career in 1987, for his 2nd solo Album Hai Hai, and the song was included in a later Supertramp album - Retrospectacle - The Supertramp Anthology.

Crime of the Century, released in September 1974, began the group's run of critical and commercial successes, hitting number four in Britain, supported by the iconic countercultural opening track "School", and the top 20 single "Dreamer". Its B-side "Bloody Well Right" hit the US Top 40 in May 1975, peaking at #35. Siebenberg would later comment that he thought the band hit its artistic peak on this, their third album, though their greatest commercial success would come later. It is interesting to note that Hodgson wrote and composed both "School" and "Dreamer" while he was in his teens, before he even met Davies and co-founded Supertramp.

The band continued with Crisis? What Crisis? released in November 1975. It achieved good though not overwhelming commercial success. The following album, Even in the Quietest Moments, released in April 1977 spawned their hit single with Hodgson's "Give a Little Bit" (#15 U.S.), and the FM radio staple Fool's Overture, also by Hodgson. During this period, the band eventually relocated to the United States and moved steadily from the progressive styles of their early albums towards a more song-oriented pop sound. This trend reached their zenith on their most popular album, Breakfast in America in March 1979, which reached Number 3 in the UK and Number 1 in the United States and spawned four successful singles, Hodgson's "The Logical Song" (#6 U.S.), "Take the Long Way Home" (#10 U.S.), and "Breakfast in America" and Davies' "Goodbye Stranger" (#15 U.S). The album has since sold over 20 million copies worldwide.

The run of successes was capped with 1980s Paris, a 2-LP live album, in which the band stated their goal of improving on the studio versions of their songs. Instead of focusing on songs from the hugely successful Breakfast in America, it included nearly every song from Crime of the Century, another testament to the importance of that album in the group's development. Initially, it was supposed to be a show recorded in Quebec City, Canada, but A&M vetoed the idea for a "more mainstream city". Also in 1980, the song "Dreamer" was finally released as a single in the U.S., where it reached #15.

After the tour, Hodgson left the band for good. There was much speculation behind the reasons why Roger Hodgson left Supertramp. In an interview, Hodgson stated that the reason he left the band was to spend time with his two small children. He moved his family from the Los Angeles area to the mountains of northern California where he built a home and studio. He focused on his family and spiritual life. Hodgson has stated that there were never any real personal or professional problems between him and Rick Davies as some people thought. Later career (1986 - 2002) The Davies-led Supertramp soldiered on, releasing Brother Where You Bound the same year. This included a Top 30 hit single, "Cannonball", along with the title track, a 16-minute exposition on Cold War themes highlighted by guitar solos from Pink Floyd's David Gilmour. The album reached #21 on the US charts. 1987's Free as a Bird included more straightforward Davies rockers, including "I'm Beggin' You", which reached Number 1 on the US dance charts. In time, Hodgson began a solo career, his biggest hit "Had a Dream (Sleeping With the Enemy)" from his first solo album In the Eye of the Storm, in 1984. Roger Hodgson has staged almost 200 concerts since 2005, and continues his career in 2010 with European and Latin American tours.

After 1988's tour, Dougie Thomson left the band over a disagreement with Davies about the use of Hodgson-penned songs during live performances. In 1996, Davies re-formed Supertramp with former members Helliwell, Siebenberg and Hart. The result was Some Things Never Change, an album which echoed the earlier Supertramp sound, released in March 1997. In 2000, Supertramp released a live album, It Was the Best of Times followed by the release of Slow Motion in 2002 and a world-wide tour. Another attempt to reunite the band, including Hodgson, failed in 2005. In 2007, Roger Hodgson accepted an invitation from Princes William and Harry to appear at the Diana Memorial Concert at Wembley Stadium on 1 July 2007. The band were one of the late Princess of Wales' favourites. In 2008, it was announced that Supertramp's music would feature in the film adaptation of Irvine Welsh's best-selling novel Ecstasy: Three Tales of Chemical Romance. In 2009 Hodgson admitted he cannot see a Supertramp reunion ever happening, but "never say never." He told undercover.com.au, "We've looked at it and talked it over, many times...I would never say never but Rick [Davies] has pretty much retired right now and I'm in the prime of my life.

Reformation (2010 - Present) On April 21, 2010 it was announcedthat Supertramp would give 35 concerts in the fall of 2010. Dates have been announced for concerts in Germany, Portugal, Holland, Italy, France and other European countries. This tour will be named "70-10" to commemorate the 40th anniversary of the group's first release. Co-founder and composer Roger Hodgson will not participate, but will instead embark on a solo 2010 tour to Australia, New Zealand, South America, Europe, Scandinavia, Canada and the US. Discography
Main article: Supertramp discography
Supertramp (1970)
Indelibly Stamped (1971)
Crime of the Century (1974)
Crisis? What Crisis? (1975)
Even in the Quietest Moments... (1977)
Breakfast in America (1979)
...Famous Last Words... (1982)
Brother Where You Bound (1985)
Free as a Bird (1987)
Some Things Never Change (1997)
Slow Motion (2002)

You need to be a member of Supertramp to add comments!