Too Mean To Die

I've been a huge fan of the albums that Accept has released after adding singer Mark Tornillo to the lineup. They've mostly ended up as either my favorite or 2nd favorite releases the year the albums were put out.

So when Accept announced the Too Mean To Die album, it immediately went on my buy list. But I have to say that I wasn't all that enthused about the song they put out to hype up the album before it's official release date.

"The Undertaker" song has nothing to do with the pro wrestler of the same name but the name is so ingrained with that guy that I couldn't help but feel this song was some sort of attempt at providing a metal anthem for the character to come out to (had he still been performing that is). This notion wasn't helped by what I thought was a cheesy video for the song. I have a slightly improved opinion of the song after listening to it without the video. The song is in a mid-tempo groove for the most part though the chorus does feature a heavier sound. But while I did think the song ended up being better than my first impression, it still nags at me a bit.

The idea of a rejected theme song also came into play a bit on the album's opening song "Zombie Apocalypse". The music is incredible. It's truly effective but I just found the lyrical content screaming to me that this was a theme song idea rejected for the TV show The Walking Dead.

But after those reservations, I was pleased to find myself enjoying the rest of the album immensely.

The title track has this fast paced edge to both the music and the lyrics. Tornillo's vocal performance on this track is perfectly suited to those lyrics.

That should be much of a surprise since Tornillo and guitarist Wolf Hoffman are responsible for writing most of the songs on the album. They are assisted by bassist Martin Motnik on four songs and longtime co-writer Deaffy is credited with co-writing credits on six songs.

A good chunk of the album sees the band focusing their lyrical content on the ills of the world as they see them. The hard-driving attack of "No One's Master" takes the media to task in the song while "How Do We Sleep" blasts through the speakers addressing the current state of the world as a whole. For me, however, the best take on the topical content of the lyrics is the song "Overnight Sensation". The soundtrack is still pretty heavy but feels a bit more reserved at the same time. But there's no holding back as Tornillo's vocals cut the notion of being "Internet famous" to shreds. The song is timely and just a bit funny as it really strikes to the truth of being a celebrity while doing absolutely nothing of consequence.

Given Hoffman's predilection for classical music, I shouldn't be surprised at the inclusion of the instrumental "Samson And Delilah", a metallic version of the Camille Saint-Saens / Antonin Dvorak piece. But what did surprise me was that I quite enjoyed this version Hoffman arranged. He also threw in a little bit of classical flourish on the song "Symphony Of Pain". The song is another burst of electrifying metal fury but that little flourish helped give the song a bit more of and edge to it.

"The Best Is Yet To Come" is kind of another "message" song and much like "The Undertaker", I really didn't take to it much on the first listen. It starts out kind of like a mellow ballad. It gets heavier for the chorus. I did appreciate the sentiment but felt the song just didn't quite work for me. But on future spins of the album as I prepared the review, I found that the song does actually grown on you a bit more than I would've thought.

And as much as I did enjoy the songs were Accept took a stance on something, I also enjoyed the more balls-out aggressive songs where the message may not have been as much in the forefront. The songs "Sucks To Be You" and "Not My Problem" are prime examples of this. Each song just hits you between the eyes (and ears), leaving a mark that you'll gladly bear proudly each time you give the album another spin.

Despite my misgivings on some of the songs, I think the Too Mean To Die album is still a quite strong offering from Accept. It's chock full of great riffs, a superb musical soundtrack, strong lyrical content and great vocals. I don't know that the band itself is "too mean" themselves, but I don't see Accept giving up the ghost any time soon if they keep turning out material like this. 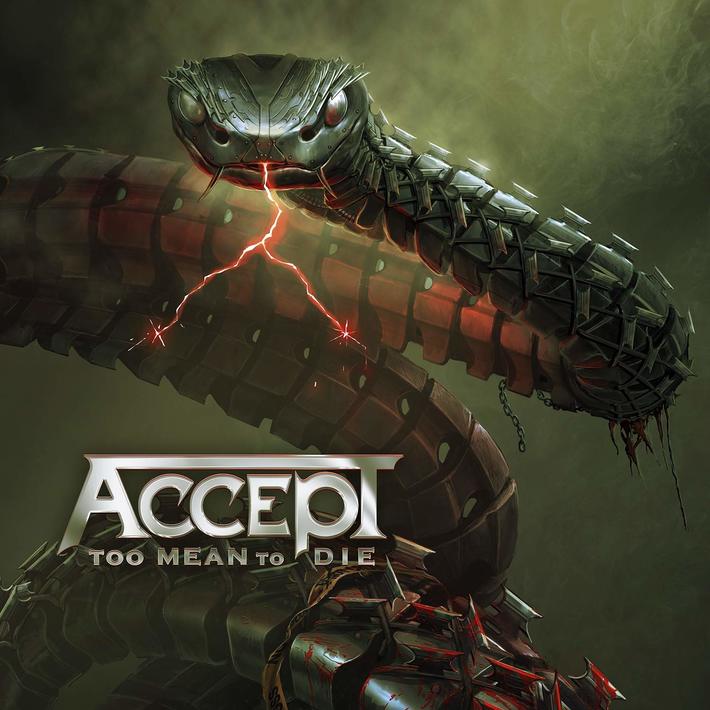