Okay, so what movies from the year 2011 have you seen? Want to see?

Well, so far that I can remember I've seen:

Get Low starring Robert Duvall about a hermit in the 1930's who goes about having a funeral party BEFORE his death. I'm not quite sure what I was expecting but despite my fandom for Duvall, I was disappointed in this movie.

Last night I went to theater and saw the movie Hanna. Saoirse Ronan was good in the title role but otherwise this movie was a let down as well. Cate Blanchett's southern accent was distracting, the quick cut camera editing was annoying and when the reason why everyone wanted Hanna was revealed, all I could think was that they kind of ripped off the comic book back story of Captain America a bit.

Other movies I'm looking forward to seeing are: Green Lantern, Thor, Conan The Barbarian, Fast Five and Beautiful Boy. The last one is about parents who hear about a shooting on a campus where there son goes to school, only to find out it was their son who did the shootings. I saw the trailer on On Demand and it looked intense.

I'm looking forward to this one, being a fan of Fantastic four (comic books):

The first couple of movies were crap, but this looks kind of promising.

Have to disagree. The trailers have looked like crap and every time someone from the movie talks about it, it sounds even worse.

None of those movies do anything for me.  But my wife likes them.

Forgot to mention this before, but I saw Jurassic World.

While it did manage to keep my eyes to the screen with the spectacle of everything going on, the movie was just so good gawd stupid.

It has gotten to the point that when of any of these big events get out of control movies come out, I root for the natural disaster or what have you to win.


Because the people in the movie (or rather the writers of the movie) are too stupid to be left alive to continue their incredible run of insulting even basic human intelligence.

Plot holes galore and the fact that this world seems to exist in a universe where no one has ever seen a disaster movie (even while acknowledging the previous Jurassic Park movies in this film).

And somehow the female lead manages to run the equivalent of at least a half marathon IN HIGH HEELS! Without them breaking or her breaking her ankles? And how does Vincent D'Onofrio deliver an Emmy award quality performance as the Kingpin in the Netflix series Daredevil and then appear in this movie?

Do you smell that? I'm calling BULLSHIT!

I gave it a 5 out of 10 overall on IMDB but mainly because of the effects etc. The story was stupid beyond measure.

I haven't seen it, but got the feeling, that it would be a waste of my time.

Kinf of like I have it with the new Terminator-movie. How many times is "I'll Be Back" a cool one-liner? Not even once!!

For those that need everything Alice Cooper related, here's your chance to see him act in glorious HD! Revel in his dubbed voice! And, not only does it feature some songs courtesy of AC, it also features.......The Alan Parsons Project?? 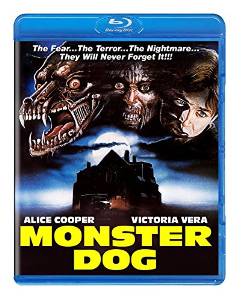 Why does that one guy have Paul Stanley's star on his face?