by "yet another AOTY candidate from the master" Jon

Threshold--Legends Of The Shires (September 2017) 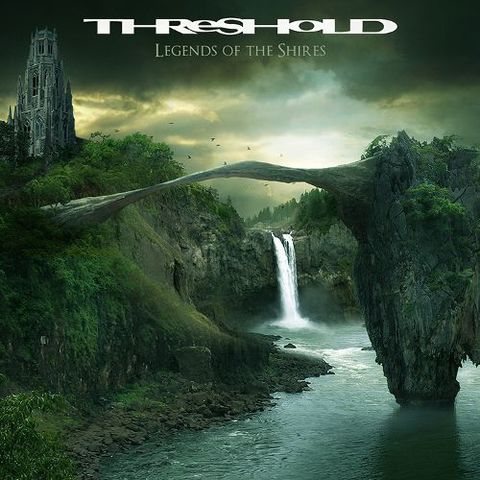 I dig the start of that first song.  I know you've posted this band before, maybe even multiple times.  I can't remember at all what I thought of them.  But in the last few days I've had a hankerin' for some fairly straight forward, meat and potatoes rock and roll.  Even with some melody.  I'm not sure if this band can deliver that, but the first song kicks it off well.  That pre-chorus is quite melodic, I like it.  It's not a straight forward chorus, it's a long chorus, but I do like it.

Trust The Process has more of the symphonic melodic rock feel, but it's quite aggressive. I didn't think I'd like it at first, but it gets better as it goes.  So far I like the vocalist.  Can't remember if that was the case previously.

So I went back and found 2 entries to the New Music Forum for Threshold.  Seems as though I didn't dislike the band at all.  One negative comment was "But as a whole, it just seems like a bunch of long songs to me.  These 5 songs run in excess of 40 minutes.  I can only imagine how long the whole album is".

That seems to hold true here too, but at least 40 minutes of run time covers 6 songs this time instead of just 5 songs.

On The Edge brings a change of pace.  I'd say it's welcome.  More aggressive rhythm guitar work.  I definitely like this song.  One thing I'm liking here is the clarity in the vocals.  I have always enjoyed being able to understand the lyrics to a song, so that's a big plus.  The drumming is quite aggressive too, but not in an annoying way, like a bunch of double bass drumming would be.  This, my friends, is a cool song, best so far.

Subliminal Freeways, cool song title.  Another mid-paced song.  This singer is quite good.  I see he is a "sort of" new singer, that did one previous album with the band that apparently is a fan favorite.  Jon, you know you have piqued my interest if I am researching the band I'm listening to.  There is nothing here that would stand out, but it still is appealing to me for some reason.  I get the feel of a band like Starbreaker here, and that's a good thing.

Superior Machine is another cool song title.  "I've been thinking my shoes have traveled a thousand roads".  I dig it. Dang it, I like this song too.  What the hell is wrong with me this morning?

Time for a question...Is this a double CD album?  Looks like Amazon's description says 2 CD, but then it shows 14 tracks across one CD.

The final track makes me think this must be, at least some what of a concept album.  Is that the case Jon?

Final verdict for me is I like it.  It's 17 bucks on Amazon, so I am not sure about a purchase, but I'm thinking very intently on it...

I had this on my want list since Monday, when I finally completed my listening of the whole album (took me 4 sittings)from the stream I found on the net. 2 CDs of Progressive music is a bit much for me these days, but this one is really good. So, unless something else pushes it out between now and the time I place my next order at Amazon, the CDs in as good as bought.

A bit of a back story. You all know my friend who eats, sleeps and breathes Progressive Rock, because I told you about him many times and to whom from now on I will only refer to as "my Prog Rock friend", did introduce me to lost of good bands, I haven't heard before. After a stretch of collecting his recommendations, I did go on research myself as well. Mainly because he did not know much about Progressive Metal, so it was up to me to fill in the blanks. And in doing so, I got across "Wounded Land" just before Threshold released "Psychedelicatessen". It sounded good to me and I ordered both CDs at once. I'm only mentioning this, because it was my small contribution to expand my friends interest and repay him a bit for all the Progressive Rock wisdom he bestowed upon me. Threshold was one of the very few Prog-Metal artists he liked. That should be enough said about the band, but let me add this; in the world where a casual listener can only accept one Prog- Metal band at the time (and Dream Theater seems to be the one) Threshold is criminally unappreciated.

For me Threshold might not have an album equal to "When Dream And Day Unite" or "Scenes From The Memory" nor are they technically skilled as Dream Theater (is there any band?) but for what it's worth, their whole discography is much more to my likening than DT's is and "Legends Of The Shires" is going to be a great addition.

I've been listening to this album for about 3 weeks now, and ...

I'm almost sure, this will be album of the year for me.

Their last album didn't really do anything for me, and this one also was kind of a slow start, but I could hear, it had something I had been missing all year, and it only have gone from good to better and better.

The signs are also there for me: Double-CD, "proggish" Heavy melodic rock, concept-album.

But the songs are very, very strong, and there's not a bad one on the CD. At first, I thought the singer (old/new) was a bit weak, but after hearing the album many times, he fit's right in.

Trust The Process is fantastic!  I am reminded a good bit of elements of Anberlin (whom I love!!), most of which comes from the riffs and the vocalist, but mixing in prog does throw this into a whole other dimension which is quite cool.  The keyboardist is very solid as well.

Im left liking this but loving the longer songs!  Give me more of those!  I will follow Niels lead, I need to hear this a couple more times but its on my wishlist...

If you like the longer tracks, you should definitely check this one out. The best song I've heard in a very long time. Epic!

Guess I better get on the ball and pick this up.  Could Jon really be a genius?

You sure he can't be a "real man of genius"?  I'm sure we could put together a complete advertisement for him...

Well, obviously it was my post that finally sold the album to you guys

True!  And thanks!  Gotta give it to Jon as well though, hes been pretty good lately!