I HAVE LOST ANOTHER ONE! - Pete Fornatale, a Pioneer of FM Rock, Dies at 66

I can't begin to tell how you shocked and sad I feel about this.
More than anyone else, Pete played music the way I have always tried to.
We met and spoke many times, and he would kid me about where I had learned to present our music like that!
I sat there quietly while he did his shows a few times at WFUV.
Although he was older, we had so much in common with memories of growing up in New York, our love of music, singers, sports, food, writers, religion, doing things our way, even a fear of flying.
Sadly we had a falling out a few years ago over politics, a minor one, (I can be such a hothead and stubborn!), but I still considered him a friend.
So I have lost a friend...and that's why it hurts so much.
I'll never get to talk or listen to him ever again.
Rest in peace Pete, all is forgiven and forgotten on my side!
Mike 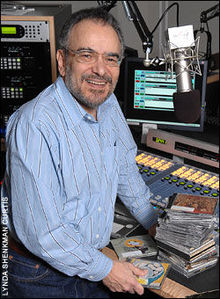 Lynda Shenkman Curtis
Rock music fans Thursday were mourning the death of Pete Fornatale, a beloved New York radio disc jockey who promoted the best new musicians for decades in his easy, free-form style. He was 66.

NEW YORK (AP) — Rock music fans Thursday were mourning the death of Pete Fornatale, a beloved New York radio disc jockey who promoted the best new musicians for decades in his easy, free-form style. He was 66.

Fornatale died in New York a week after suffering a stroke, his son, Peter Thomas Fornatale, told The Associated Press.

"He represented the golden age of progressive FM radio," he said.

When The Beach Boys "were the most uncool thing in the world," he said, his father had the clout, in the 1970s, to help make them popular again — by introducing them on the Carnegie Hall stage.

Fornatale entered with a surfboard.

"It's a very sad day for radio," said songwriter Paul Simon. "New York has lost one of its most acclaimed and wonderful radio personalities. ... He really knew his era and his music."

As a DJ on WNEW-FM in the 1970s, he established a loyal following by spinning records by lesser-known artists and album cuts beyond the hit singles.

One of his favorites was Poco, a country-rock band he championed.

He helped launch the careers of singer-songwriters like Suzanne Vega, John Gorka and Christine Lavin. Grammy winner Shawn Colvin told The New York Times in 2001, "Pete helped pave the way for so many of us. He was a rare guy in radio then."

In the 1990s, Fornatale was featured on the station known as "K-Rock," following Howard Stern's show.

Fornatale's hallmark was "to use music in a very creative way," his son said.

"He could take a song that you heard a hundred times, but play it in a context — whether on a special occasion or the music around it — that would make some of the most familiar tracks in rock history sound like you were hearing them for the first time."

Until his death, his father still hosted the show "Mixed Bag" on Saturdays for Fordham University's WFUV-FM station.

The Bronx native was a Fordham student DJ when he developed the style that grew into the kind of FM rock broadcasting listeners still enjoy.

"The complete freedom to put this package together, for better or for worse stamped me then and is still with me today," Fornatale said in 2001.

In recent years, he also became a rock historian.

He and his son worked together on a book celebrating the Rolling Stones' 50th anniversary that they finished just before Fornatale's death, titled "50 Licks," to be published later this year or in early 2013. The DJ also wrote "Bookends," the story of the Simon & Garfunkel album by that title.

Fornatale leaves three sons, including Mark and Steven, and his former wife, Susan Fornatale, all of New York.

The funeral will be private, but a tribute concert is planned for a date to be set.

Pete Fornatale, a Pioneer of FM Rock, Dies at 66

Pete Fornatale, a disc jockey who helped usher in a musical alternative to Top 40 AM radio in New York in the late 1960s and early 1970s, presenting progressive rock and long album tracks that AM stations wouldn’t touch and helping to give WNEW a major presence on the still-young FM dial, died on Thursday in Manhattan. He was 66.

The cause was complications of a stroke, his son Mark said.

FM radio had been around for a while but did not come of age until the 1960s, when, amid the whirlwind of a growing counterculture, the federal government mandated that FM stations carry different programming from that of their sister AM bands. Enterprising D.J.’s grasped the chance to play longer, fresher, rarer music and give voice to the roiling political and social issues of the day.

Mr. Fornatale was at the forefront of the FM revolution, along with WNEW-FM colleagues like Scott Muni, Rosko, Vin Scelsa, Dennis Elsas, Jonathan Schwartz and Alison Steele (who called herself “the Nightbird”). They played long versions of songs, and sometimes entire albums, and talked to their audiences in a conversational tone very different from the hard-sell approach of their AM counterparts.

WNEW-FM may have been the most influential experimenter. When the station dropped rock music for talk radio in 1999, Billboard called it “a legend, affecting and inspiring people throughout the industry.”

Mr. Fornatale (pronounced forn-a-TELL) had actually beaten WNEW to the punch. As a sophomore at Fordham University in 1964, he persuaded the school’s Jesuit leaders to let him do a free-form rock show on what was officially an educational station. He continued that show for a few years after he graduated, and for a while could be heard on both WFUV and WNEW.

WOR-FM became the first commercial station in New York to adopt the format, in 1966, but abandoned it after about a year. WNEW, with the slogan “Where Rock Lives,” adopted it in 1967.

Mr. Fornatale came on board in 1969 and quickly moved to the center of New York’s music scene. He gave early exposure to country-rock bands like Buffalo Springfield and Poco. He did one of the first American interviews with Elton John, and got a rousing ovation when he brought a rented surfboard to Carnegie Hall for a Beach Boys show. He introduced Curtis Mayfield to Bob Dylan at a Muhammad Ali fight.

In 1982 he started “Mixed Bag,” a program that emphasized singer-songwriters, on Sunday mornings. His regular guests included Suzanne Vega, who introduced herself to him by sending a fan letter.

One of Mr. Fornatale’s signatures was playing songs that followed a theme. It might be colors, with a playlist including the Beatles’ “Yellow Submarine” and Joni Mitchell’s “Blue.” Or the theme might simply be radio.

Peter Fornatale was born in the Bronx on Aug. 23, 1945, and graduated from Fordham Preparatory School, on the campus of Fordham University. His introduction to rock ’n’ roll came in 1956 when his father summoned him to the television to see “this crazy guy” — Elvis Presley. The first record he bought was Presley’s “Hound Dog.”

Mr. Fornatale graduated from Fordham with a degree in communications in 1967 and taught English at a Roman Catholic high school before joining WNEW. His voice drew praise for its mellow, almost professorial tone, although some listeners may have chosen to describe it as nasal.

By the early 1980s, stations specializing in what had been known as free-form radio were bringing in business consultants who urged less variety in records and more control over the disc jockeys. Mr. Fornatale later complained that he and his colleagues had been demoted from chefs into waiters, “and fast-food waiters at that,” as he told The Record of Bergen County, N.J., in 1999.

Mr. Fornatale wrote several books, including one on the making of Simon and Garfunkel’s 1968 album “Bookends,” and one on the Woodstock music festival. He was also the main writer for a series of 600 trading cards on the life of Elvis Presley.

He had lived for six years in Rockaway, Queens, and the previous four decades in Port Washington, N.Y.

Mr. Fornatale’s marriage to Susan Kay Flynn ended in divorce several years ago. He is survived by his sons, Peter, Mark and Steven, and his brother, Robert.

His WFUV show, which like his earlier WNEW singer-songwriter show was called “Mixed Bag,” ran from 4 to 8 p.m. on Saturdays.

“If you give me the right idea for a program,” Mr. Fornatale said in 2004, “I can give back to you a three-hour journey where, if you tune in at any time, you’re likely to hear something that will entertain you. But if you take the ride with me, when we get to the end, you’ll say, ‘Wow, what a long, strange trip it’s been.’ ”

This article has been revised to reflect the following correction:

An obituary on Friday about the disc jockey Pete Fornatale misidentified the area of Long Island where he had lived for many years. It is Port Washington, not Port Jefferson.

You sure do LOVE Stephen Stills, lol!

Cheers back at ya!
Mike

Hello All Thank you Mike for findng the Monterey footage and articles as this is near and dear to my heart as my beloved Stephen was there with the guys as they made the BIG FOUR circuit Woodstock, Big Sur, Monterey and Altamont( what a mess that was but they were there). Thanks ever so much, Cheers from California Love ya Jackie

Comment by Mike Pell on May 5, 2012 at 12:58am
Mike,
Too bad, he was the most creative DJ I ever heard!
His first show at WNEW-FM was as a fill-in, two weeks before Woodstock.
And his very first live commercial was for that festi8val, so an interesting way to begin, since no one at the time could anticipate what that would become.
I am sure I must have mentioned him in that Salute To Radio.
I KNOW I have at other times on my broadcasts.
I want to honor him, but am not sure how just yet.
We had a real similarity in how we present music, but he was the master!
And a friend.
Mike

Sorry to say Mike - No - This one slip by me - Was he mentioned on your Progressive FM Radio Podcast - Listen to WNEW every year for a week in Manhatten in August.  I only remember Scott Muni and Alislon !  1968 - 1972 .

You're into the FM Radio thing, did you know about him?

Sorry to hear about this great progressive radio Icon !!!!

And Jon, he was at WNEW_FM for over 20 years, left and came back till they switched to talk.

That was smart...a talk station in STEREO...and with their history as the best FM Rock station ever!

Oh man Scott, WAS he a Poco fan!

He played them when they began and never stopped.

I tell you, I really do feel broken-hearted, it's the knowing he is gone and there will be no talking to him, no new shows with brilliant ideas and song choices by him.

We really were in competition with each other, but I always knew he was better than me.

Guess the last time I felt this way was when Scott Muni died.

Funny how you form these lasting relationships with people on the radio, feel as though they are friends or even family, and welcome them into your home.

I met Muni a few times, but Pete was close enough for me to get pissed off at him!

I can only hope I have that effect on some people out there- just a few and I would be very proud and thankful.

Condolences Mike!  He was Poco fan too!!