Over the years for September 11th, I have explained that although the Pentagon was struck, songs about Washington D.C. are not many, and the ones you do come across are always about the government- usually with some sort of protest or humor.
Then there is United 93, the plane where the passengers rose up and crashed in Shanksville, Pennsylvania.
At least Neil Young did a song about that.
So no offense to the people in those other places for mainly concerning ourselves with New York.
But in truth, we did take the biggest hit!
And there are so many songs about New York, I promise I'll never run out of them.
I find new ones each year.
I'll start with a song about going FROM New York, but quickly do a U-turn, as there are so many about going TO New York!
It's the usual mix of Old and New, and listen for Peter Sellers in one of the songs.
Finally, during my vacation I lost a friend to cancer- Diget Dupont-Day.
What a sweetheart, and very much like me in so many ways.
I used to call her the female ME!
So to close this episode, a song for her- Life won't be the same without her.
God bless her, and God bless America!
Here are the links to Music and Feelings, at Mike Pell Rockollections:
At Podomatic:
http://radiopell.podomatic.com/entry/2013-09-10T19_19_41-07_00
At Soundcloud:
http://soundcloud.com/radiopell/02-new-york-songs-2013
Mike

RJ, you are RIGHT!

I just listened and Walk Away Renee is in there- don't know how I missed it.

Hahahahaha...for a guy with a bat, HE looks like the one bloodied!

Hey, I'm a Met fan, but that seems about right.

Swing at something, hit yourself, lol! 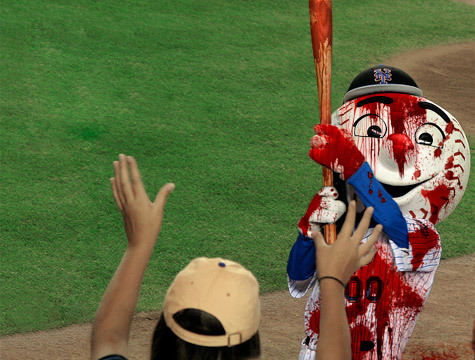 Comment by Mike Pell on September 12, 2013 at 5:38pm
RJ,
Is listening at home any better...does it improve my show, lol?
What's not to like about that Connor Oberst song?
It's so short it doesn't have time to annoy anybody, and I actually like it quite a bit.
The Climax Blues Band is a dynamite song, I used to play it a lot, but it kind of went forgotten until I thought of it this year.
Sure bro, come on to New York and look up the the mighty Pell...and King Kong too while you're here, lol!
Piazza said he was straight, and I have no reason to not believe him.
Jon loves the Mets? He is a strange one.
And they have been hapless for too long now- they used to be known for their development of great pitchers.
No more!
I didn't catch any Walk Away Renee, I'll have to listen again.
That next one made you think of The Beatles or Ringo solo...really?
Not even close, lol! But Steeleye Span were looking for a ukulele player for that song and they asked Peter Sellers.
To their surprise he said yes.
I didn't know Nights On Broadway was your favorite song by The Bee Gees.
All my favorites are from their early albums, when they were considered Progressive Rock.
Listen next week, I think I'll be playing an example of that.
Hey man, I love that Neil Diamond song- that one and another song I can't remember at the moment were the reasons I bought the album!
Thanks about Diget- like I told Jon, it was only a matter of time, and like the song say's "I'm ok now" with it!
Isn't that Linda Ronstadt number a beautiful song?
I wonder how many have ever heard it before?
A worthy recipient of the Golden Pell, and one your best ever choices!
Thanks for the listen and real writing, lol,
Mike

Well, since I wrote so little for part one, maybe I can put a few more words down for part two.  By the way, I'm off today so I'm actually listening at home, and I'm typing while listening.

That first song by Connor O'berst is okay.  I like the fact that it's short.  I think it takes something to be willing to perform such a short song.  You know it'll never be played on the radio.    Song two is definitely about New York.  Quite a few name checks (for places in NY).  And again a fairly short song.

Now this is a live tune.  He says "I'm going to New York, I'm going if I have to walk".  I've never been to New York, but I'd like to go some day.  Might even look up the mighty Pell if I do.  I have no idea who this is.  My first though is J. Geils Band, but the vocalist doesn't sound right for that.  Nice geetar solo.  Wow, The Climax Blues Band.  Would've never guessed it.

A strange one from Bell and Sebastian.  A little acoustic diddy.  Piazza, "are you straight or are you gay?"  Did we ever get the answer to that?  Jon should know, he loves the hapless Mets.   That is a pretty strange lyrical song.  Did I hear him reference Walk Away Renee?

This next one makes me think of The Beatles.  Maybe Ringo solo?

Ooooh.  A cover.  Nights On Broadway.  My favorite song by The Bee Gees.  Not sure who this is.  Sounds like a 70's disco singer.  Not Donna Summer. Maybe someone like Yvonne Elliman or Gloria Gaynor.  Not a bad cover at all.

Now we have street sounds.  I know that voice.  It's Neil Diamond.  It's okay, not what I would call his best.

Sorry to hear about the loss of you friend.  The tribute you played by Linda Ronstadt is a beautiful song.  A real tear jerker too.  It certainly just made up my mind about the Golden Pell.  It'll sit right here for this show.

Thanks Jon, but I knew it was coming so it wasn't unexpected, and like the song say's "I'm ok now"!

Hey this shortness of breath is getting dull, you guys usually have something interesting to say.

Not like that crazed undecipherable thing you wrote last time, LOL!

Mr. Met has it right, but I always thought he was gay!
Thanks for the listen, the shorthand and the picture,

I dunno, it's catching. I don't have much to say. 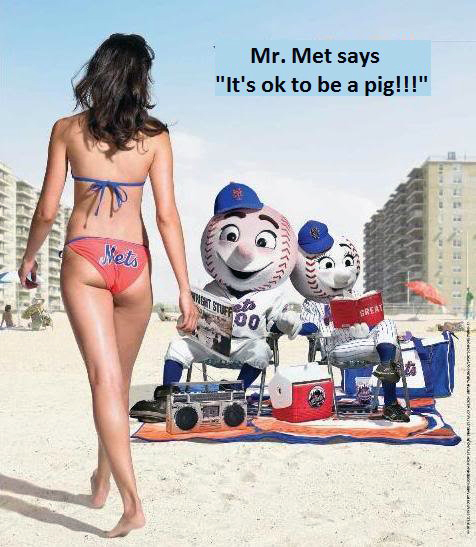